A recent High Court decision in Manchester ruled that a debtor, in receipt of a certificate of completion following the conclusion of his IVA, was entitled to the proceeds of a PPI claim, even though the claim had been an asset of the arrangement. The Scottish Courts have also had to grapple with this same issue but with regard to Protected Trust Deeds. This article looks at the facts of recent cases (currently being appealed) north and south of the Border.

It is estimated that there were almost 40,000 Protected Trust Deeds (“PTD”) entered into between 2005 and 2010.  Similar to an IVA, a PTD is a voluntary arrangement in which the debtor conveys his estate to an insolvency practitioner (“the Trustee”) to be held on trust for the benefit of creditors.  A large number of those who enter into a PTD do so because of borrowing that they have incurred on credit cards.  It is not, therefore, surprising that between 2005 and 2010, many of those who entered into a PTD also have claims relating to the mis-selling of payment protection insurance (“PPI”).

The scenario which the Scottish courts have recently had to deal with will be familiar to those involved in this area.  The Trustee has realised all the known assets of the debtor, made a distribution to creditors and provided the debtor with his discharge.  Sometime after this, the debtor is awarded compensation for PPI wrongly sold to him prior to the date he entered into the PTD.  The question is who is entitled to receive payment?

In the case of Donnelly v Royal Bank of Scotland, the Bank argued that it was entitled to set off the PPI compensation against sums which were owed to the Bank and for which the Bank had submitted a claim in the PTD.  In the case of Dooneen Limited and another v David Mond, the argument was between the debtor and former Trustee under the PTD.

The judgments, issued within 8 days of each other, arrived at different answers to the question of who was entitled to payment of the compensation. In Donnelly, the Sheriff held that the Bank was entitled to apply set off.  The Sheriff held that the redress payment had its “source and origin” in a contingent obligation which was in existence prior to the debtor’s insolvency and therefore formed part of the debtor’s insolvent estate.  The ability of the Bank to apply set off was available notwithstanding the subsequent discharge of the debtor and the Trustee under the terms of the PTD.  In Dooneen, Lord Jones sitting in the Outer House of the Court of Session held that properly construed, the PTD terminated when the Trustee made a distribution which he determined to be the final distribution under the PTD. As a result, the right to payment of the PPI claim had reinvested in the debtor thereby defeating any right which the former Trustee might have to those sums.

Donnelly v RBS – The Facts
Between 1997 and 2003, Ms Donnelly borrowed sums from the Bank and in connection with those loans was sold PPI.  In 2006, Ms Donnelly entered into a PTD and the Bank submitted claims with Ms Donnelly’s Trustee for the outstanding loans.  The Trustee adjudicated on those claims and the Bank was paid a dividend although this still left the Bank with a shortfall.  Ms Donnelly was granted her discharge under the PTD in December 2013.

Between February and March 2014, Ms Donnelly and the Bank concluded three agreements which settled the PPI mis-selling claims (“the PPI agreements”).  However, when Ms Donnelly sought payment from the Bank, they refused and applied the principle of the balancing of accounts in bankruptcy to set off the sums due under the PPI agreements against the outstanding loans.

What were Ms Donnelly’s arguments?
It was argued on behalf of Ms Donnelly that the principle of the balancing of accounts in bankruptcy was not available because that principle only operated in the context of a subsisting insolvency.  Ms Donnelly had been discharged before the PPI agreements were entered into and so the principle had no application.  Alternatively, it was argued that Ms Donnelly’s liability to the Bank under the contracts of loan had been extinguished by the operation of prescription.  Finally, it was argued that even if the principle of the balancing of accounts in bankruptcy could apply, it could only be given effect to by a duly appointed Trustee and there was no longer a Trustee in office so the Bank first needed to reappoint one.

What were the Bank’s arguments?
In response, the Bank argued that its liability to Ms Donnelly for the PPI compensation existed at the date of Ms Donnelly’s insolvency.  It was either an unascertained liability or a contingent liability arising out of the financial services regulatory regime which was in place at the time the PPI was sold.  Therefore, Ms Donnelly’s right against the Bank vest in the Trustee and formed part of her insolvent estate.  Set off operated by virtue of the principal of the balancing of accounts in bankruptcy.

Central to the Bank’s case was that Ms Donnelly’s discharge did not reinvest her with any rights which would have vested in the Trustee prior to her discharge or extinguish the Bank’s debt in respect of the loans.  The Bank also argued that the lodging of claims with the Trustee constituted a “relevant claim” by the Bank for the purposes of the Prescription and Limitation (Scotland) Act 1973 (“the 1973 Act”) and meant that the Ms Donnelly’s obligation to the Bank had not prescribed.

What did the Sheriff decide?
The Sheriff described the case as involving a “tangle of legal conundrums” however at its heart was this single question:  were the respective obligations of the parties, which were sought to be set-off, in existence as at the date of Ms Donnelly’s insolvency?  The Sheriff decided that they were and that set off could apply.

The Sheriff took the view that the Bank’s obligations had “their source or origin in a binding statutory regulatory scheme that was in existence – and to which parties were committed – prior to the debtor’s insolvency.”  The Sheriff was heavily influenced by two earlier cases dealing with contingent obligations.  Those were the cases of Ben Line Steamers Limited (a case involving a participating employer’s obligations under a pension scheme by virtue of a post insolvency amendment to the pension scheme rules) and In re Nortel (a case involving an insolvent company’s obligations to contribute to a pension scheme by virtue of a post insolvency financial support direction).

In pursuing the PPI claim, the Sheriff held that Ms Donnelly was doing so as a constructive trustee for the benefit of her unsatisfied creditors.  The mere discharge of the debtor from the PTD did not extinguish the debtor’s obligation to pay the Bank its shortfall under the pre-insolvency contracts of loan.  Neither the discharge of the debtor or of the Trustee had the effect of reinvesting the debtor in her estate.

The Sheriff also agreed with the Bank that the lodging of claims with the Trustee stopped the clock in terms of prescription and therefore the Bank’s debt had not prescribed.

Dooneen Limited & another v David Mond – The Facts
Between 1998 and 2002, the debtor entered into three loan agreements with the Bank and purchased PPI.  In September 2006 the debtor entered into a PTD.  In November 2010, the Trustee made what he called a “first and final” distribution to creditors.  In January 2015, the debtor appointed an agent to make a claim on his behalf in respect of the mis-sold PPI.  In April 2015, the Bank of Scotland awarded £55,910 to the debtor in respect of the PPI claim and declared that the amount would be paid to the Trustee.  The debtor and his agent then raised proceedings seeking a declaration that the PPI claim should be paid to them.

The judge closely examined the precise wording of the PTD.  Clause 11 provided that the trust deed would terminate on “the final distribution of my Estate (which for the avoidance of doubt shall include a nil distribution) by my Trustee in accordance with this Trust Deed.” In construing the PTD as a whole, Lord Jones considered that the PTD terminated on the making of the final distribution and at that point, the right to payment of the PPI claim reinvested in the debtor.  This was seen to be the interpretation which was linguistically most satisfactory and also avoided uncertainty for the debtor in relation to when the PTD came to an end.

Where do these cases leave us?
The decisions leave the law in a state of uncertainty.  In deciding the issues before him, the Sheriff in Donnelly made no distinction between a sequestration (bankruptcy) and a PTD.  However, the decision in Dooneen must cast some real doubt over whether the Sheriff was right not to distinguish between the two processes.

The Sheriff held that neither the discharge of the debtor nor the discharge of the Trustee would end a trust deed or sequestration process unless it was a discharge on composition or where all creditors had received payment of their claims in full.  In the Sheriff’s view, until that happened, any creditor could seek re-appointment of a Trustee in order to ingather and distribute a newly discovered asset.

However, the terms of the PTD and in particular the termination clause are not examined to any extent in the Donnelly decision, probably because the debtor’s case was based on the effect of her discharge under the PTD and not its termination.  Lord Jones was concerned that if the trust deed did not terminate when the Trustee made a final distribution, it would introduce uncertainty regarding the debtor’s position which would be unsatisfactory and that could not have been what was intended by the debtor when he signed the trust deed.

The decision in Donnelly has been appealed.  The appeal court will be able to review the case in light of the decision in Dooneen and at that stage hopefully hand down a decision which will bring some much needed certainty for both debtors and insolvency practitioners alike.

Andrew Scott has provided an update to this article as both cases have been appealed.  Click here to view it. 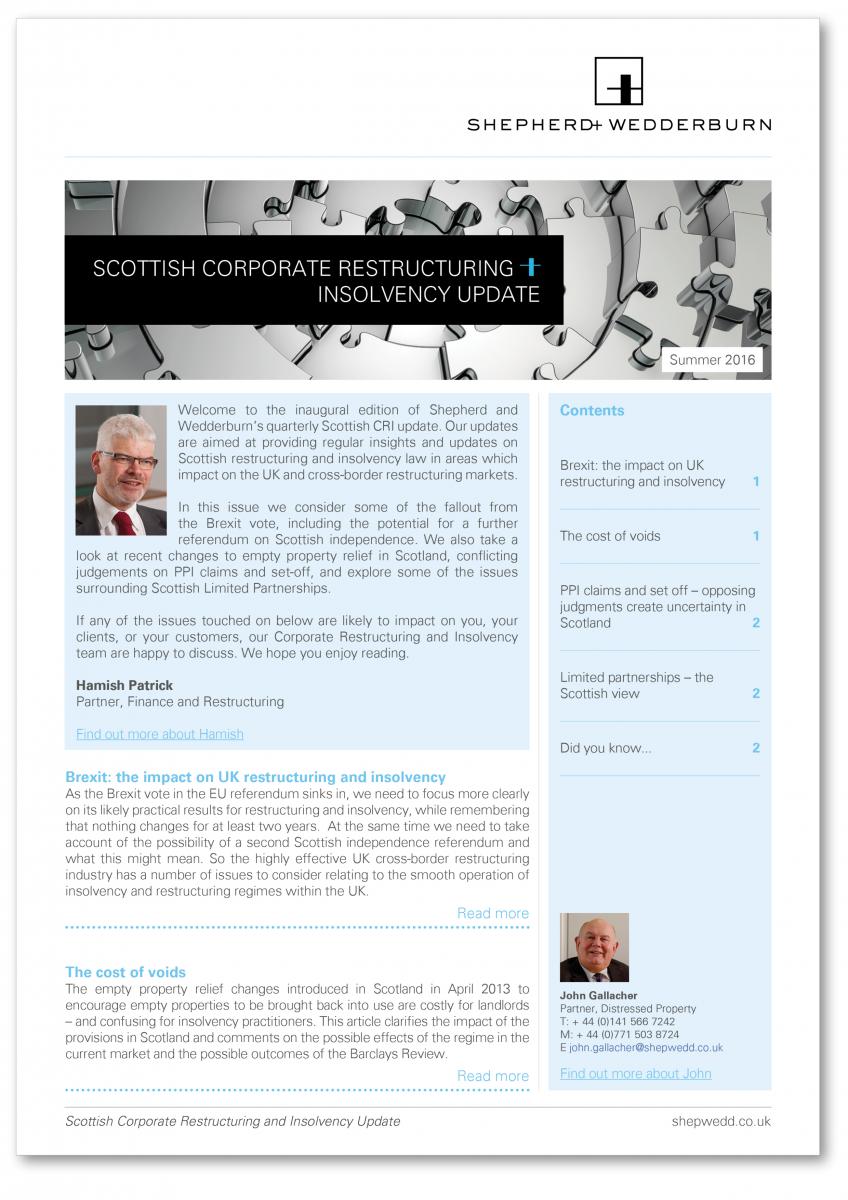