Brexit: What are the Scottish Parliament's legislative powers and limitations?

Home > Our Knowledge > Brexit: What are the Scottish Parliament's legislative powers and limitations?

When the UK as a whole voted to leave the EU with Scotland voting to remain, the constitutional position of the Scottish Parliament was brought to the centre of the political debate. This debate has thrown up a series of questions regarding the legislative powers, and the limitations, of the Scottish Parliament. In the latest of our Brexit Bulletins, Shepherd and Wedderburn look past the politics to provide insight on the legal issues which underpin these questions.

The implication is that the Scottish Parliament could refuse to consent to Brexit and therefore Westminster would be unable to pass the required legislation.

This position is made clear by the 1998 Act (and was not altered by the 2016 Act). Section 28 (7) states that the ability of the Scottish Parliament to legislate on devolved matters “does not affect the power of the Parliament of the United Kingdom to make laws for Scotland”. This is recognised by the use of the word “normally” in Section 28(8) of the 1998 Act. It is highly unusual for such an uncertain term to be used in legislation and clearly anticipates circumstances where Westminster could legislate without the consent of the Scottish Parliament.

Additionally, it is not necessarily the case that Brexit would constitute a breach of EU law. The process for the UK to leave the EU will be governed by Article 50 of the Treaty of the European Union. The UK’s exit from the EU will therefore be carried out under EU law and not in contravention of it.

The legislative position is that “the Union of the Kingdoms of Scotland and England” is a reserved matter under Schedule 5 of the 1998 Act.

When the SNP formed a majority government in 2011, the Scottish Government was of the opinion that this wording meant that the ability to hold a referendum was reserved to Westminster. Therefore, the 2014 Referendum was legitimised by the Edinburgh Agreement, a cross governmental agreement signed by David Cameron and Alex Salmond whereby both governments agreed that a referendum on Scottish independence would be held and the result respected. The Edinburgh Agreement led to The Scotland Act 1998 (Modification of Schedule 5) Order 2013, (the 2013 Order); a statutory instrument passed by Westminster.

The effect of the 2013 Order was to explicitly exclude the calling of a referendum on Scottish independence from the list of Reserved Matters under the 1998 Act, provided it was held before 31 December 2014, thus handing that power to the Scottish Parliament. It was under this authority that the Scottish Parliament was able to pass the 2013 Act under which the referendum was held.

However, the 2013 Order only allowed for a single referendum and it had to be held before the above noted date. It is therefore highly unlikely that the Scottish Parliament could claim the authority to hold a second referendum based on either the Edinburgh Agreement or the 2013 Order.

There is some international precedent for such a referendum in the Catalan Self DeterminationReferendum in 2014. This vote returned a strong vote in favour of Catalonian Independence from Spain however, the result was declared “unconstitutional and void” by the Spanish Constitutional Court.

The effect of such an unofficial Referendum is difficult to predict. It could be simply dismissed as an opinion poll with no political bearing or it could be seen domestically and by EU member states, as a statement of the will of the people of Scotland.

What will happen next?
The UK’s constitution is currently in a state of flux and it is difficult to predict exactly what changes will come next. Much will depend on the new political landscape which emerges following the EU Referendum. As ever, your contacts at Shepherd and Wedderburn will be on hand to provide guidance and advice to protect your interests in the changing climate. 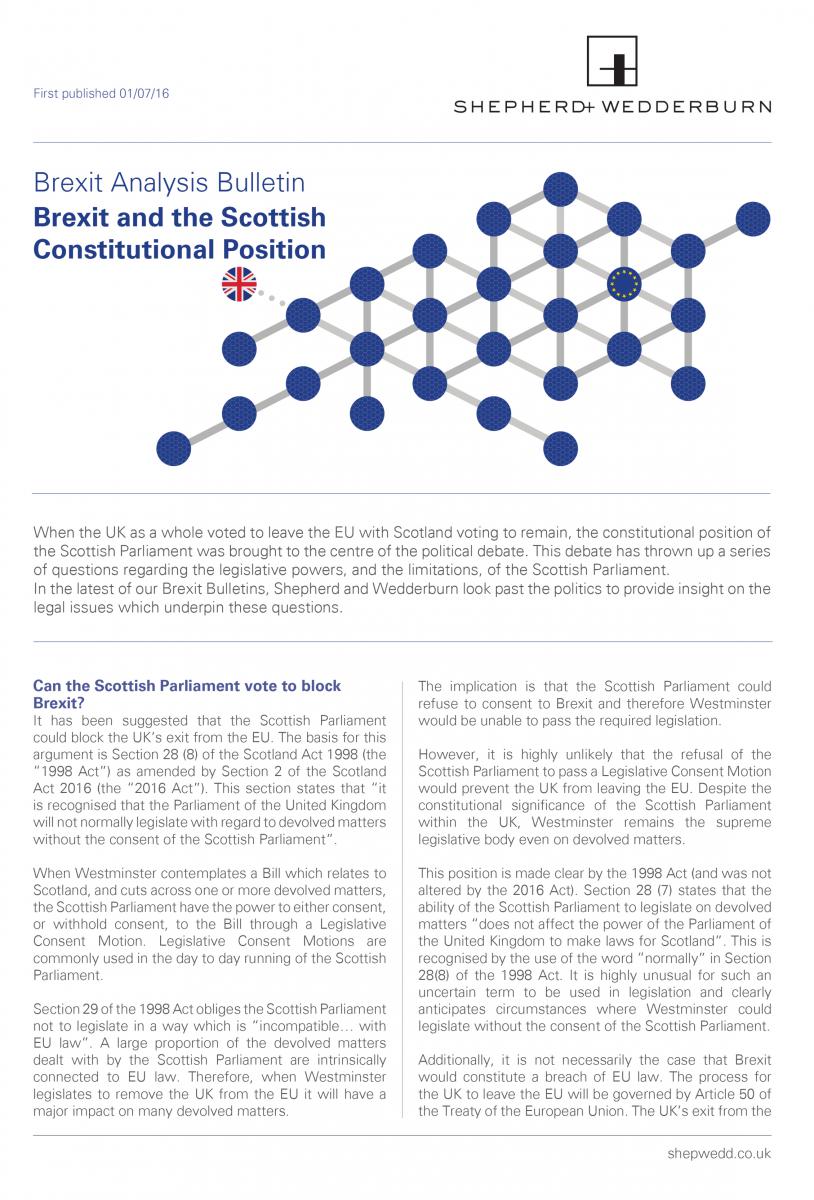