Tuesday 8 March 2022 will mark International Women's Day, and the campaign theme this year is #BreakTheBias. Although hashtags are catchy, I was eager to understand what 'breaking the bias' means for my colleagues and I in practice. As we strive to build a gender equal world, free of bias, stereotypes and discrimination, it occurred to me that often the biggest obstacle we face in our efforts to value and celebrate our successes is an internal bias toward our own capabilities.

Tuesday 8 March 2022 will mark International Women's Day, and the campaign theme this year is #BreakTheBias. Although hashtags are catchy, I was eager to understand what 'breaking the bias' means for my colleagues and I in practice. As we strive to build a gender equal world, free of bias, stereotypes and discrimination, it occurred to me that often the biggest obstacle we face in our efforts to value and celebrate our successes is an internal bias toward our own capabilities. Social scientists have linked this inability to recognise or value one's own abilities and successes to a psychological phenomenon known as imposter syndrome.

What is imposter syndrome?

Maya Angelou, Meryl Streep, Michelle Obama; women who are notable public figures and widely regarded as outstanding in their respective fields, but who have also each admitted to not feeling worthy of the recognition that they have received. Have you ever compared yourself to your high-achieving peers and felt inadequate by comparison? Have you quipped at work about being a 'charlatan' or a 'fraud', just waiting to be found out? Have you doubted whether you 'belong' in your chosen profession, or told yourself that you can just 'fake it until you make it'? If the answer is ‘yes’ to any of these, then you may have experienced imposter syndrome; the anxiety and self-doubt that leads one to question one's professional ability, and even to belittle one's own successes.

While individuals of any gender might develop imposter syndrome during the course of their career, research indicates that women are often more susceptible to its impact and suggests this may be due to lower levels of testosterone (often known as 'the confidence hormone'). Higher levels of testosterone in men may make it more likely that they will push through any self-doubt or feelings of inadequacy, while women are more likely to succumb. The effect of giving in to this self-doubt may be seen in women leaving their profession unexpectedly, or choosing not to seek promotion, citing a lack of confidence in their own ability or in their likelihood of success.

Imposter syndrome in the legal profession

Since International Women's Day was first recognised by the United Nations in 1977, we have come a long way in the fight for gender equality, with women's rights becoming increasingly recognised in law, public policy and by the legal profession. UCAS data shows that 69% of law applicants in 2021 were women; similarly, the Law Society of Scotland reported that in the practice year 2020/21, 67% of new trainees were female. However, 2021 judicial diversity statistics in Scotland show that only 29.31% of judicial appointments were female. That is not to say that there is a simple correlation between this disparity in female representation at opposite ends of the professional continuum and imposter syndrome; rather it is one aspect of a mix that includes factors such as caring responsibilities, personal choice, and the relatively recent societal shift toward a more gender equal profession. Nonetheless, imposter syndrome should be a part of the conversation when we consider the statistics.

The effects of COVID-19 and the global pandemic have meant that many trainees and newly qualified solicitors have entered the profession from a position of isolation, without sufficient face-to-face contact with mentors, partners and peers, and the feedback loop that is inherent in these interactions. In addition, we have all been robbed of the opportunity for the 'learning by osmosis', and the confidence boosting camaraderie, that is inevitable through day-to-day exposure to an office environment. There is now a growing awareness that feelings of imposter syndrome may be more prevalent than ever before in junior members of the profession, as a result of that loss of contact with colleagues in the formative stages of their professional development.

I read recently that the legal profession tends to attract those of a 'Type A' personality, and in a workplace of ambitious, competitive and high-achieving individuals it is natural that many will compare their performance with that of their colleagues. That is not necessarily always a bad thing. Indeed, it is that environment of high expectations and professional challenge   that attracted me to the legal profession , and several of my colleagues have said that a certain degree of second guessing oneself, a sort of 'anxious perfectionism' if you like, can be useful in keeping them sharp and alive to the challenges of the job. However, when that conscientiousness starts to tip over into paralysing self-doubt and feelings of incompetence that can prevent a colleague from performing in their role or moving ahead in their career, then we must be on the lookout for the tell-tale signs of imposter syndrome.

Of course, it isn't enough to simply be aware that imposter syndrome as a form of self-bias exists; action must be taken to level the playing field. But how can one level the playing field in one's own mind? How can one break a bias of one's own construction?
As with so many aspects of mental health and wellbeing, the advice for addressing imposter syndrome centres around the importance of recognising and accepting these feelings when they arise. Mental health professionals and wellbeing coaches highlight the need to examine and confront the deeply ingrained beliefs that we hold about ourselves, and to talk openly with trusted friends and colleagues about feelings of inadequacy. Employers and managers are advised of the importance in fostering open channels of communication, while taking an active stance in facilitating the training, support and pathways for progression that will help bolster confidence in those moments when doubts about competence or suitability for promotion arise.

The key takeaway, for me, is that individuals and organisations alike can take steps to raise awareness of imposter syndrome and address its impact. Framed in the context of International Women's Day, with increasing numbers of women entering the legal profession, and the likelihood of a hybrid working model moving forward, it becomes increasingly important to acknowledge that while the external biases in gender equality are being increasingly addressed in the workplace, the internal bias that exists within many women (and men) in the form of imposter syndrome, equally requires that a light be shone upon it in order to fully #BreakTheBias.

Jennifer Wells is a Paralegal in our Employee Share Incentives Group.

To learn more about the imposter syndrome, how to identify, manage and overcome it view the recording from our virtual event. 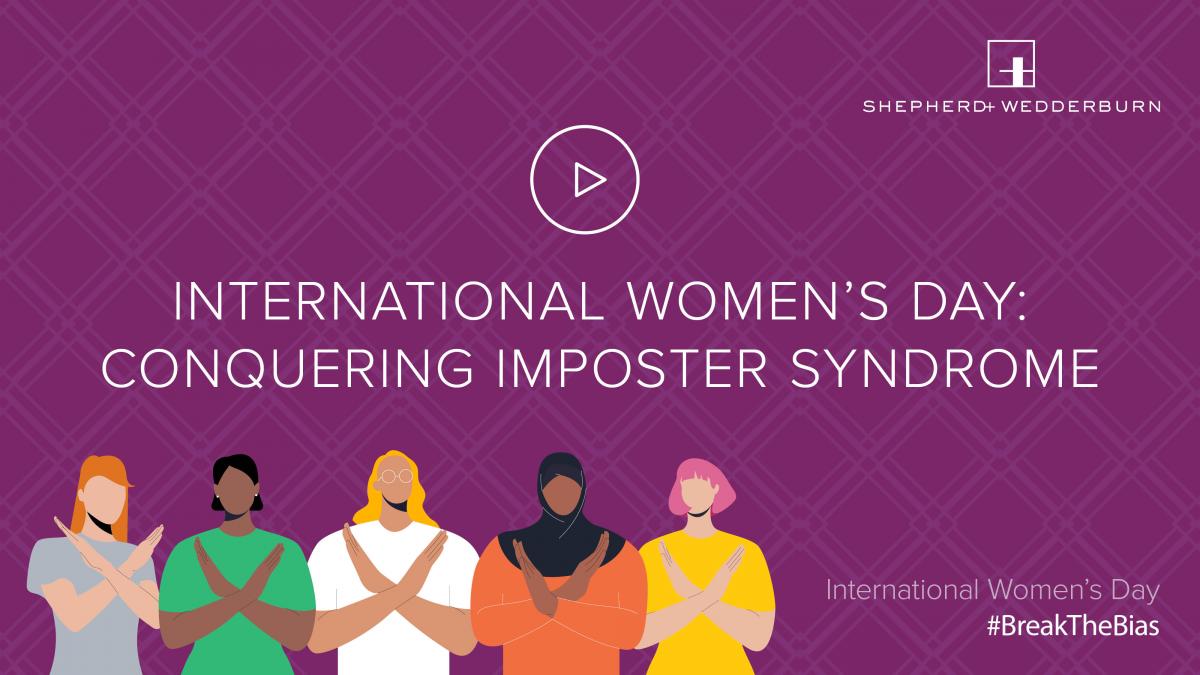