Supreme Court rules in Brexit Case that Government needs consent from Parliament to trigger Brexit – but not from the Scottish, Welsh or Northern Irish Administrations.

The Supreme Court has ruled in the “Brexit Case” that the UK Government needs Parliamentary consent before triggering Article 50 and beginning the two-year process of Brexit, but that the consent of the devolved governments in Scotland, Wales or Northern Ireland is not necessary. The decision, by an 8-3 majority, is a defeat for the Government’s position that Parliamentary consent was not required.

Delivering the leading judgement, Lord Neuberger, President of the Supreme Court, found that the EU is a source of UK law under the 1972 European Communities Act, and that once triggered, Article 50 will inevitably mean that after two years this will no longer be the case.

Given the constitutional principle that no institution can make or repeal UK law without the consent of the Houses of Parliament, the Court ruled this consent is necessary before Article 50 can be triggered. The Court drew a distinction with the devolved administrations in Scotland, Wales and Northern Ireland, which, constitutionally speaking, exercise their law-marking powers on behalf of the UK Parliament, as devolved to them by e.g. the Scotland Act 1998. In giving its consent to the triggering of Article 50, the UK Parliament would be modifying the powers that it has so granted, and as such nothing further is legally required from any of the devolved administrations.

The Court also considered the Sewel Convention, a non-binding constitutional convention that the UK Parliament will usually ask for consent from the devolved administrations before making decisions about devolved areas of law. The Court held that while the convention is significant, it is not legally binding and as such is a matter of politics rather than law, so not something the Court can rule on. The Scottish Government has already stated that it intends to bring a legislative consent motion on Article 50 to the Scottish Parliament, despite the Court’s decision meaning that this is not required.

The Government has reacted to the judgement by stating it intends to stick by its original timetable of triggering Article 50 by the end of March 2017, and intends to bring a bill before Parliament in the coming days authorising Ministers to do so. The exact form of this bill is unknown; however there are likely to be significant efforts from backbench and opposition MPs to amend it, potentially introducing a requirement that the Government publish a White Paper on its Brexit proposals and objectives. It is also unclear how the House of Lords, in which the Government does not have a majority, will approach the bill. There is a convention that the House of Lords will not vote down a bill mentioned in a governing party’s manifesto; however given Brexit was not one of David Cameron’s 2015 campaign promises it is not clear whether this will apply. In reality whilst amendments may be on the table, the House of Lords will be unlikely to block the bill. 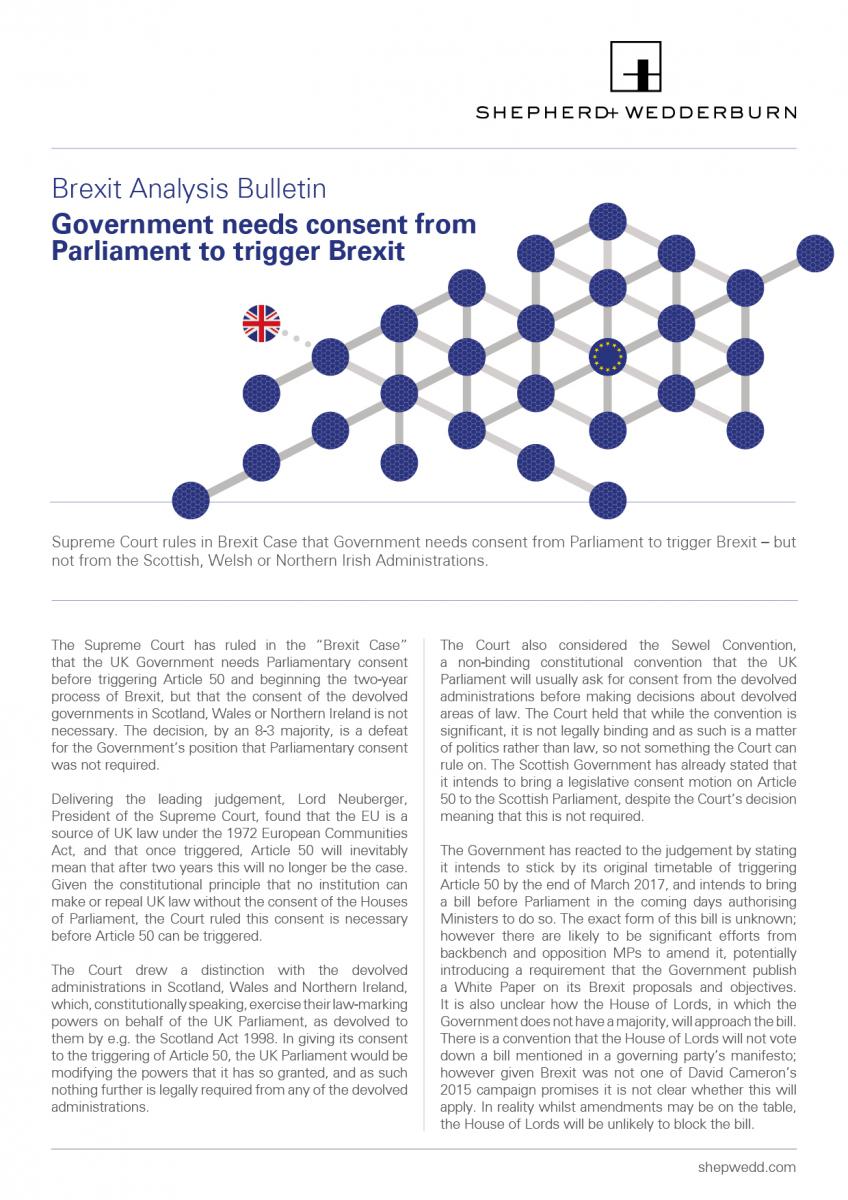