This article provides a brief summary of the Government’s Brexit White Paper and an update on where things stand on the legislation to trigger Brexit.

On 2 February the UK Government published a White Paper on its proposed approach to the upcoming Brexit negotiations. This is just one further step in the political and legal process of triggering the UK’s exit from the European Union.

How we got here?
Publication of the White Paper followed the vote in the House of Commons on 1 February in favour of legislation which will give the Prime Minister the right to trigger Article 50 and begin the exit negotiations. Legislation by the UK Parliament is necessary following the case brought by Gina Miller in the Supreme Court and, as part of the legislative process, opposition parties had called on the Government to provide a White Paper setting out its negotiating objectives.

What it says
The White Paper repeats the 12 points previously outlined by the Prime Minister in her key Brexit speech on 17 January at Lancaster House. Those points include the need to provide legal certainty, remove the jurisdiction of the Court of Justice of the European Union from UK law, control immigration, maintain and build on existing free trade and protect the rights of workers.

The White Papers also sets out the Government’s commitment to work with the devolved Governments across the UK in the Brexit process. The White Paper does not set out the obstacles that may be encountered in attempting to achieve these 12 aims and there is no indication as to where compromise by the UK Government may be necessary. In this sense, the final Brexit picture is likely to differ from what is contained within the White Paper. It is, however, a helpful summary of the Government’s key negotiating aims and it is likely to become a recurring point of reference throughout the Brexit process.

What happens now?
The Article 50 legislation has passed its first hurdle in the House of Commons but there are still some stages to go before it becomes law. At present, the Prime Minister remains unable to trigger Article 50.

The legislation will be debated in the House of Lords for the next two weeks. The Government does not hold a majority in the Lords and it is widely expected that Labour, Lib Dem and crossbench peers will unite to amend the legislation in some form at least. Likely amendments include a right for Parliament to send the Government back to the negotiating table if unhappy with the final proposed Brexit deal, and a safeguard on the rights of those EU citizens already living in the UK.

If amendments are made by the Lords, the legislation will be passed back to the Commons for further consideration. This introduces the possibility of the proverbial “parliamentary ping-pong” as the legislation is repeatedly shuttled between the two Houses. Any delay here would of course jeopardise the Prime Minister’s tight timetable for triggering Article 50 by the end of March. The Lords will, however, come under immense pressure if they are seen to be preventing the will of both the people and the elected chamber and it is unlikely that they would continue to resist without support from the Commons. 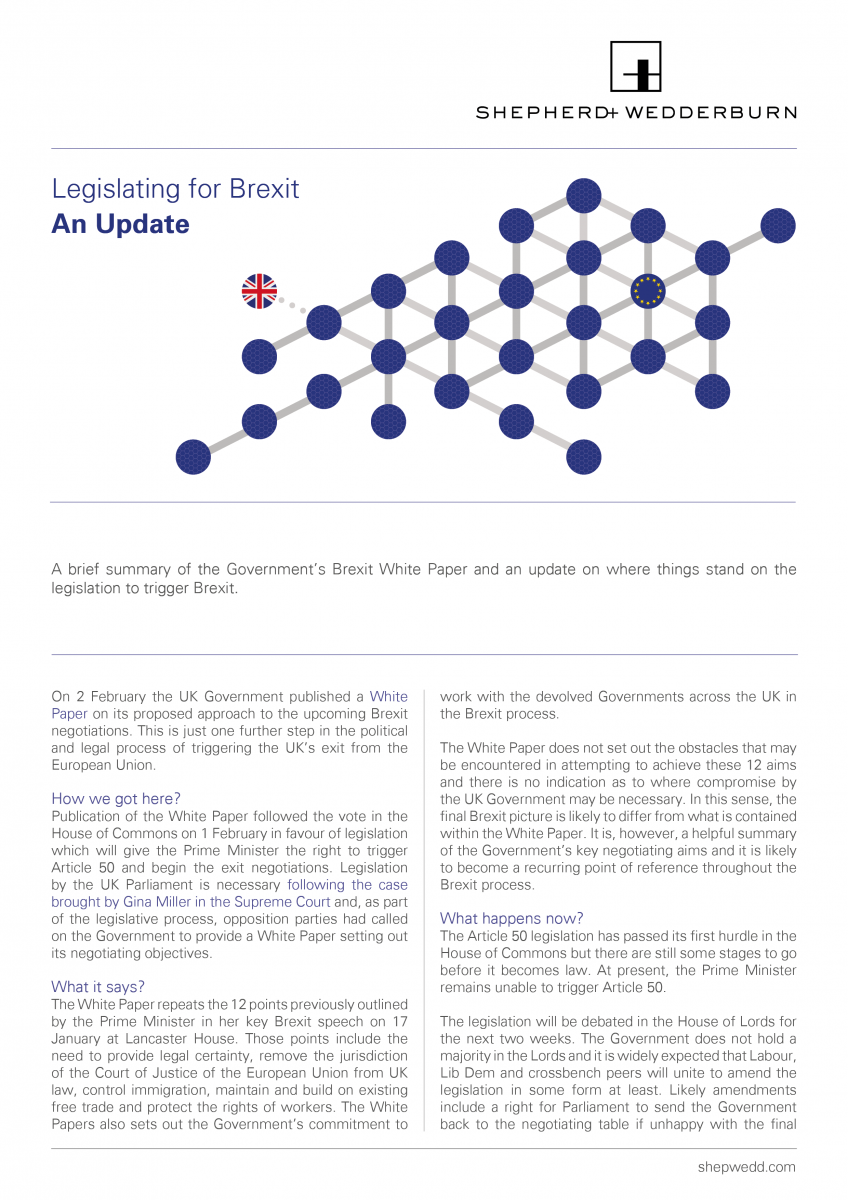