Shepherd and Wedderburn’s highly ranked competition team, led by John Schmidt, advised high street retailer John Lewis in the investigation by the Competition and Markets Authority into allegations that the price of sports bras was pushed up by a lingerie maker and three department stores.

After deciding there were no grounds for action the Competition and Markets Authority said it would drop the case, which centred on agreements between France-based DB Apparel whose brands include Shock Absorber and Wonderbra and high-street retailers John Lewis, Debenhams and House of Fraser.

This result has been celebrated by the Shepherd and Wedderburn team which is shortlisted for Competition Team of the Year by The Lawyer Awards 2014.  The awards, now in their twentieth year, have been established as a c

elebration of excellence in the profession across private practice, the public sector, commerce and industry, and the Bar. The winner will be announced at the awards ceremony which takes place at the Grosvenor Hotel, London next week.

Commenting on the decision, John Schmidt said “This is one of only two enforcement cases which the UK authorities closed after the Statement of Objections and oral hearings, so we’re particularly proud of the outcome. It is a great credit to the new Competition and Markets Authority and the independence of the case decision group that they can decide after the statement of objection and the oral hearing that they simply do not have a case.” 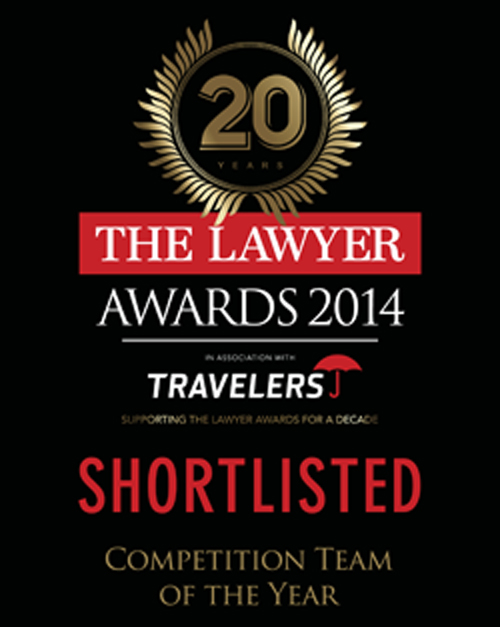