Three businesses have admitted participating in an illegal cartel in relation to the supply of cylindrical galvanised steel tanks in the UK and agreed to pay fines of £2.6 million

What does this mean for you?
The settlement with the Competition and Markets Authority (CMA)

On 21 March 2016, in a settlement with the CMA, three UK companies admitted participating in an illegal cartel in relation to the supply of cylindrical galvanised steel tanks in the UK and agreed to pay fines totalling more than £2.6 million. The fourth member of the cartel escaped the fine because it applied for leniency, which is in effect an admission of participation in the cartel.

The four companies, Franklin Hodge Industries Ltd, Galglass Ltd, Kondea Water Supplies Ltd and CST Industries (UK) Ltd, agreed to share the market between them, fix prices and rig bids between 2005 and 2012.  The parties agreed the prices behind the scenes and gave an impression to their customers that competing bids were submitted. Whereas in fact, the bid prices were agreed in advance, with companies quoting ‘winning’ price for the customer group allocated to them. According to the information provided by the CMA, these arrangements were agreed and reinforced at regular meetings between the participating companies over a seven-year period, as well as through contacts concerning particular bids.

Galvanised steel tanks are used for water storage in larger buildings, such as schools, hospitals and other commercial and public buildings, as well as for the supply in the fire sprinkler systems. 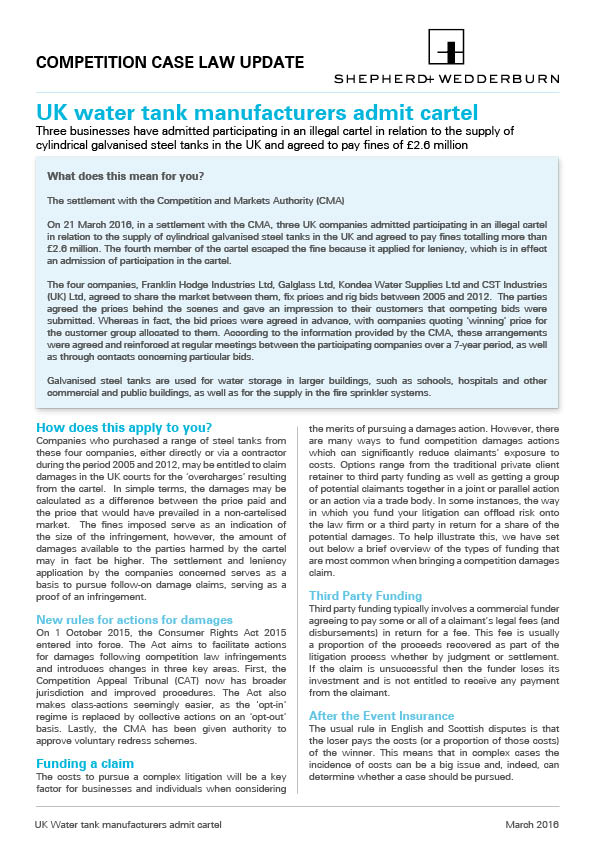