Help for tenants in the cost of living crisis

In this article, Scott Ritchie, Partner in our property and infrastructure team and Ann Stewart, property and professional development adviser discuss new legislation introduced by the Scottish Government aimed at providing some respite in the private residential rented sector through a freeze on rents and a suspension of evictions.

Few people will be unaffected by the current cost of living crisis: according to the Office for National Statistics, over 90% of adults say their living costs have increased in the last year; many finding it difficult to meet energy costs, mortgage payments or rent, and spending less on essentials such as food and energy. With inflation running at almost its highest level for forty years, and widely forecast to increase, the continuing effects of the Ukraine conflict, rising costs and shortages of raw materials, upheaval from the pandemic, and supply chain disruption mean that imminent relief from the crisis is unlikely.

In a response to the crisis, The Scottish Government has introduced emergency legislation to provide some respite in the private residential rented sector: the two main provisions will provide certainty about housing costs by introducing a freeze on rents; and remove the fear of homelessness by imposing a period of suspension of evictions.

The arrangements will be kept under review and Scottish Ministers must produce a report (following consultation) justifying the need for and the proportionality of continuing the restrictions, the first such report to be produced by the end of this year. Further reports must be produced every three months after that. Any extension of these provisions is likely to have an increasingly adverse impact on many landlords, and so accountability is essential. 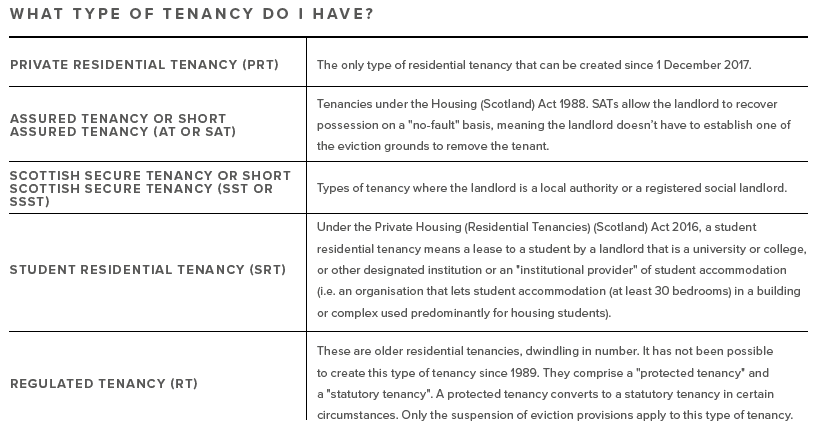 Rent may not be increased more than once in any 12-month period. Where the last rent increase was made due to an order by a rent officer or of the First Tier Tribunal (FTT), the 12-month period is to start after the expiry of 3 months from the date on which the landlord gave notice to the tenant that it had made an application to the rent officer or FTT.

When can the permitted rate be exceeded?

A landlord under a PRT, an AT or an SAT can apply to the relevant rent officer to increase the rent payable under the tenancy by more than the permitted rate, but only up to a maximum of 3% of the previous rent. This is intended to allow landlords to recover some increases in their costs: subject to the 3% limit, they can increase the rent to recover up to 50% of the increase in certain costs incurred in the six months prior to making the application.

To have an increase approved, a landlord must apply to the relevant rent officer, who has to be satisfied that the increase in these costs occurred during the six-month period before the application, and that the proposed increase is not more than 50% of those costs, and not more than 3% of the previous rent payable.

If the rent officer is satisfied, the rent can be increased, but the increase will be less than 3% of the previous rent if the effect of the landlord's 50% increase in costs is less than that percentage.

This provision does not apply to SRTs. However, in those cases "rent" does not include any sums payable by the tenant in connection with excessive use of any utilities. Rent does however include sums payable in respect of services, repairs, maintenance or insurance.

The Act makes specific provisions for this type of tenancy: where a student occupies premises provided to them in their capacity as a student by a university or college or designated institution or an institutional provider of student accommodation.

Typically, a student residential let is for a fixed period of (usually) 42 weeks and then terminates. While it is clear that the Act will prevent increases in the rent during that period, it doesn't appear to apply to new student tenancies, since the prohibition against increases applies within an existing tenancy arrangement. The Act does not appear to impose any limit on new starting rents for new tenancies.

The Act provides for a 6-month period of protection from eviction in respect of any eviction notice served on or after 6 September 2022 or in proceedings raised on or after that date.

During that 6-month period (which starts on the date an eviction decree is granted), the decree cannot be executed and no charge for removing can be served. This means that even if the tenant is in default, they cannot be evicted from their home. However, it is recognised that there are some breaches of tenancy arrangements where a tenant should not benefit from the protection of the law.

In cases where the tenancy is a student residential tenancy, an eviction decree can be enforced where the ground for the removing is due to criminal behaviour or anti-social behaviour.

In any other case, where the ground for the removing is one of the specified grounds listed in the Act by reference to the appropriate legislation, a decree for removing can be enforced where particular grounds are established. These grounds depend on the type of tenancy, and some additional grounds have been introduced by the Act: 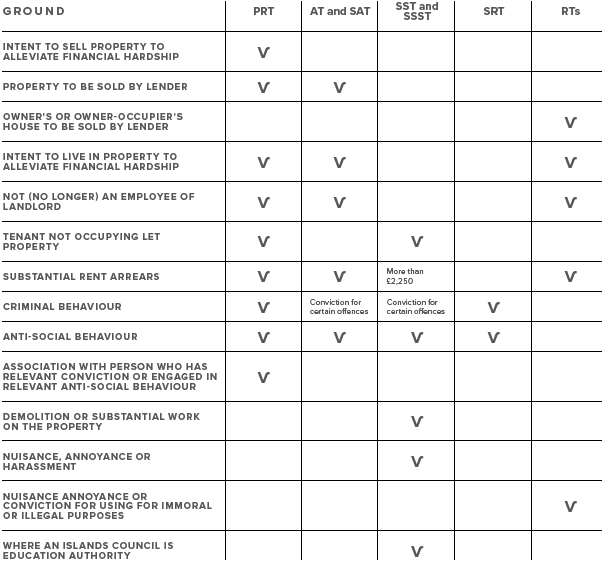 Protections against financial hardship of the landlord

While the main purpose of the Act is to provide protection for vulnerable tenants, it is recognised that a freeze on rent levels and a moratorium on evictions could have a significant financial impact on some landlords.

Accordingly, the Act introduces some safeguards for landlords, entitling them to enforce a decree for removing if there are substantial arrears of rent, or the landlord has no choice but to sell the property or move into it to avoid financial hardship.

The landlord will need to produce evidence to the FTT of the intention to sell, which may include a letter of engagement from their solicitor in connection with proposal to sell, or advice from a financial advisor or accountant, a Home Report and an affidavit from the landlord.

Similarly, if the landlord intends to live in the property to alleviate their financial hardship, then they must intend to do so as their only or principal home for at least three months, and must provide similar evidence, such as a letter of advice or an affidavit to the FTT in support of their position.

Although being in arrears is usually a ground for eviction under the relevant legislation, it is not under the Act. However, the Act does accept that if a tenant is in substantial arrears, it is unreasonable for them to benefit from the protections that the Act provides. So, it will be possible to evict a tenant where the arrears are or exceed an amount equivalent to 6 months' rent under the tenancy. Tenants for whom the payment of rent is dependent on receipt of relevant benefits that have been delayed or not paid, will be taken into consideration. And the landlord will be expected to have complied with the pre-action protocols under coronavirus legislation.