A recent judgment by the Court of Justice of the European Union (the CJEU) regarding the conclusion of a trade deal between the EU and Singapore may have a significant impact on the shape of Brexit negotiations.

On 16 May 2017 the CJEU published its much-anticipated opinion on the competence of the EU to conclude a proposed free trade agreement with Singapore. The Court’s opinion provides an authoritative legal view on how such trade deals must be approved by the EU and by individual Member States.

Clearly, this will be a key marker for what kind of post-Brexit free trade agreement the UK can secure with the EU, without needing to have individual Member State approval.  This is particularly important given the UK Government’s declared wish to negotiate a new trade deal during the two-year withdrawal period, a very short timescale in any case but one which would be extremely challenging if not impossible if the deal needed to be approved individually by each Member State.

Background
In September 2013, the EU and Singapore agreed the text of a bilateral free trade agreement.  This agreement was negotiated and agreed on the basis that it would deal with the traditional questions surrounding trade, such as customs and tariffs, but that it would also regulate additional areas related to trade, such as intellectual property, public procurement and sustainable development. This wider scope means that the proposed EU – Singapore agreement was characterised as one of the first ‘new generation’ free trade deals.

The negotiation had proceeded on the basis that the EU could ratify the final agreement unilaterally without the need for approval from individual Member States.  The Commission argued that the content of the agreement fell entirely within the exclusive competence of the EU following changes made by the Lisbon Treaty.  The European Council and some Member States disagreed with this and demanded that the Member States be made parties to the agreement alongside the EU and Singapore.

In order to resolve the dispute, the Commission asked the CJEU to issue a formal opinion on whether all aspects of the proposed EU – Singapore agreement were within the exclusive competence of the EU or, alternatively, whether some elements were still matters which Member States had some competence over.

The Court’s Opinion
The CJEU held that the majority of the provisions contained within the agreement fell within the exclusive competence of the EU, including areas such as competition policy, intellectual property, sustainable development and environmental protection where there is a sufficient correlation to the EU’s trade remit.  This was in contrast to the findings of Advocate General Sharpston, who issued her formative opinion to the CJEU for consideration in December of last year (before it makes its final judgment in a case the CJEU has the benefit of an opinion from an independent legal expert, the Advocate General or ‘AG’).  In that opinion, AG Sharpston concluded that Member State approval would be required for some of the proposed measures relating to transport, intellectual property and environmental protection.

The CJEU has not gone as far as AG Sharpston in limiting the EU’s exclusive competence.  The CJEU did not, however, find in favour of exclusive EU competence in respect of two areas of the agreement: non-direct foreign investment (e.g. ‘portfolio’ investments made without any intention to influence the management of a company) and investor-state dispute resolution.

As to provisions relating to non-direct foreign investment, this would not fall within EU exclusive competence unless the terms of the agreement would affect EU legislation and, in this instance, the CJEU concluded that this was not the case.

Investor-state dispute settlement refers to legal mechanisms which allow an entity to take legal action against a state for practices which are allegedly in breach of their obligations under a free trade agreement (e.g. a particular regulatory requirement being discriminatory). The restriction on such arrangements is perhaps the most eye-catching element of the CJEU’s opinion as the inclusion of such mechanisms in other proposed deals, such as TTIP with the US and CETA with Canada, has caused significant political controversy and unanimous Member State approval may therefore be difficult to achieve in this area.

The CJEU concluded that neither of these matters was in the exclusive competence of the EU.  As a result, the EU - Singapore agreement would be considered a ‘mixed agreement’ requiring ratification by the EU and Member States acting together.

Implications for Brexit
The CJEU’s opinion provides welcome clarity on the law surrounding ratification of trade deals by the EU and this clarity will undoubtedly inform the EU’s future trade negotiations.  This will, of course, include the negotiation of a “new, comprehensive, bold and ambitious” trade deal between the UK and the EU.  Provided that the UK deal is restricted to those areas that have been declared to be within exclusive EU competence, the agreement could be concluded without the additional delays and political considerations associated with individual Member State approval.  Though, of course, negotiations with the EU institutions themselves will not necessarily be straightforward for the UK even if ratification by individual Member States is not required.

That said, investor-state dispute settlement and non-direct foreign investment are increasingly important elements of modern trade agreements and it remains to be seen whether the UK and / or the EU would desire the inclusion of these provisions.  If so, the future UK – EU agreement would be rendered a “mixed agreement” for the purposes of EU law and require ratification by both the EU and Member States.

In either case, it is clear that the implications of the CJEU’s opinion will be in the minds of all parties as and when Brexit trade negotiations begin in earnest. 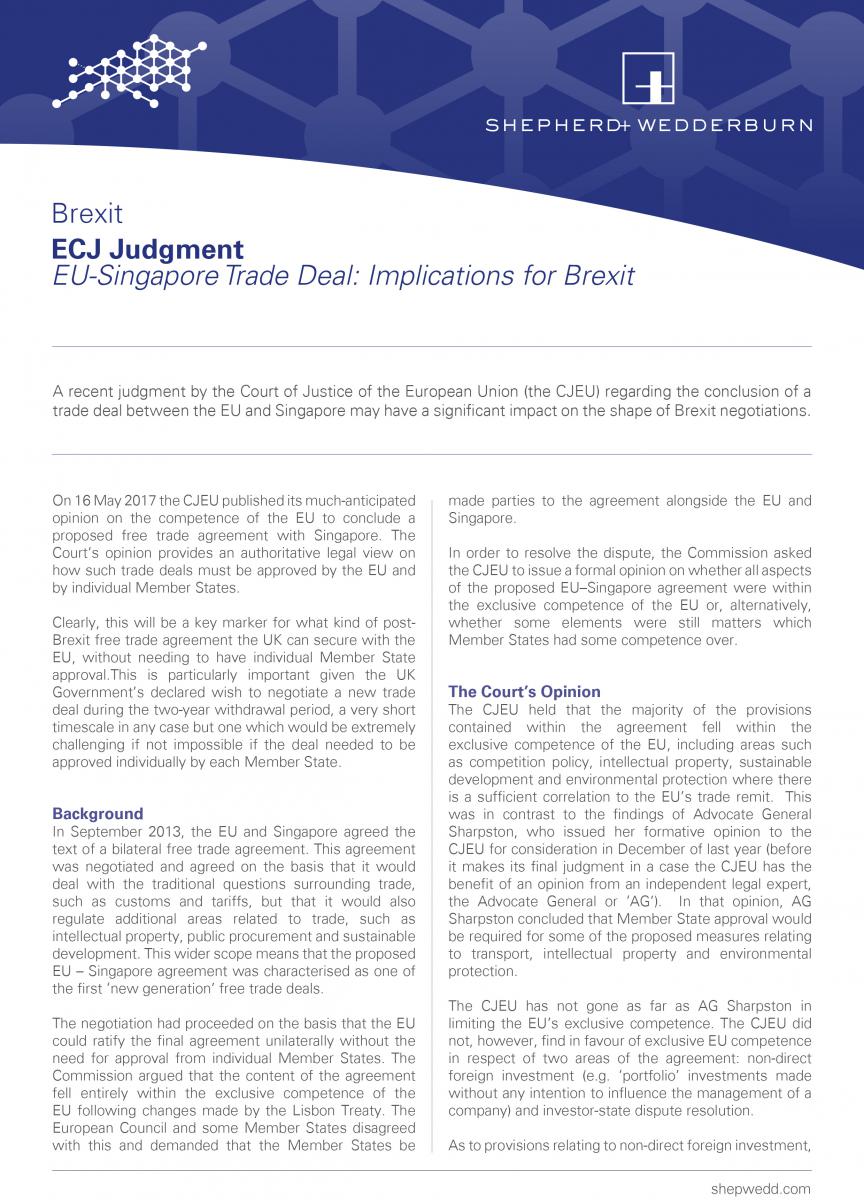